Here’s a summary of the hotels (that I can remember) from 2015: the good, the bad and the ugly!

I’ve divided “the good” down into “The Decadent”, “The Stylish” and “The Small But Beautiful”

This is a new hotel in Vienna and everything about it is polished and beautiful. I’m not the sort of person who takes pictures of rooms and bathrooms but the suites are stunning! There is a great restaurant called 57, which gives a great view over the river and the city.

I stayed here in February for the second time. The communal areas (restaurants, bars and lobby) are beautiful. The lounge area has sheepskins and roaring fires. It’s a little bit out of the way, on the Gold Coast, but is really nice. The warning is, that some of the rooms are a little bit shabbier than the main parts of the hotel.

I have stayed at The James a few times (twice this year) but April was the first time I got a Loft suite, which has the movie den as well as a living room and bedroom suite. They are always nice rooms, but this suite was really good. The hotel is in a very central location, and if you’re staying there a while (and get bored of the room service menu), Big Bowl is around the corner!

I really liked this hotel! The bar and restaurant were packed on Friday and Saturday, there was great music, the decor was eclectic- kind of quirky- but it worked. It’s really central: out the front you can walk to bars and the bus station, out the back you walk into the main shopping area. It wasn’t expensive either!

There is a LOT going on in the foyer of this place! Of course, it’s grey, so I love it. They have so many different chair designs all over the place. There are screens showing modern art and photography, and it’s here that I first saw the photographs of Antoine Rose (read this article from Wired about them)

This hotel in London has great design in the communal areas. It’s kind of a low cost but good quality model. The rooms are small but perfectly formed. The beds flush to the window mean you can sit in bed and see London. A Samsung tab means you can control everything from one point in the room, including the coloured lights that form the wall of the bathroom!

Small but perfectly formed: this place is pretty basic, but gives you everything you need as a base for exploring the city. It’s five minutes from the metro stop, and you can easily walk into Akasaka, where there is a lot going on. 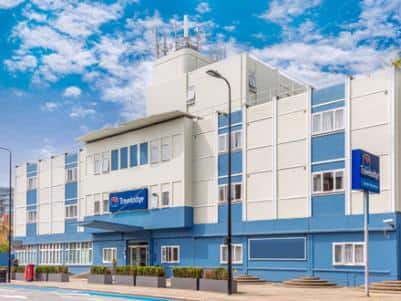 It’s a budget brand, and I’ve stayed with them a few times. but this is not a great hotel. We booked it as a base for a music festival in Clapham Common, but it is shabby, with views over a car park. The benefits of it are that, it actually has pretty good parking. Which in London is rare. I would only recommend staying here if you knew you would be returning drunk. My least favourite of the year. We went to Amsterdam during a really busy time, and this is all that was available. Icky.

This place is pretty expensive for what it is. The rooms are like sleeping in the 1980s. The elevator is teeny weeny. The breakfast room is like an early ’90s cruise ship.

This is in the Wallpaper Guide for Copenhagen, so perhaps I just expected more! It’s average. Average with the scent of cigarette smoke in the foyer. It is in a good location, and the rooms are ok- it just wasn’t what I thought it would be!

The “You’re ok, you’re just not my thing”

The rooms are nice and the bathrooms are lovely. Not sure it really qualifies as a “boutique” hotel though. It’s not offensive in any way, it just doesn’t move me either way.

I should like this place. The architecture is good, the rooms are nice. They have a really nice rooftop bar with retractable roof. The only reason I can think that I didn’t enjoy my stay here is that is was the weekend of the derby and it was full of obnoxious women, tarted up and drunk. Maybe I would have loved it more if they hadn’t been there!